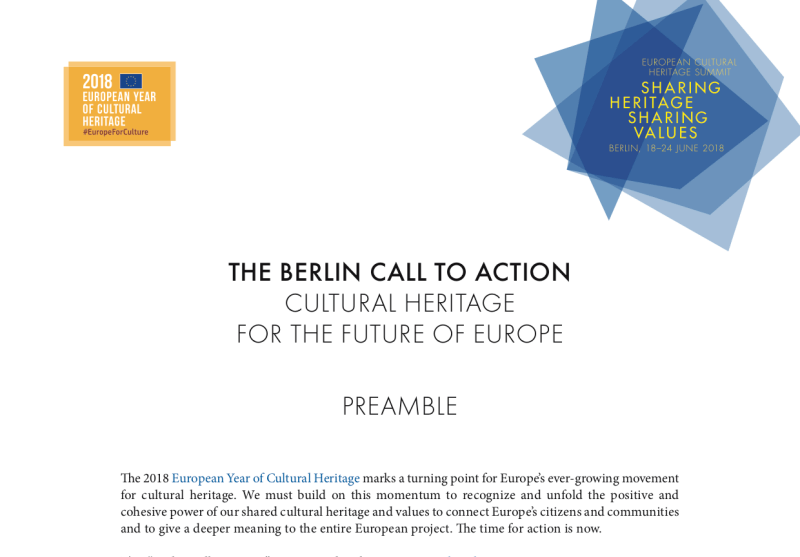 The European Investment Bank has signed the Berlin Call to action “Cultural heritage for the future of Europe” to promote the “positive and cohesive power of our shared cultural heritage and values to connect Europe’s citizens and communities”.

Emma Navarro, Vice-President of the EIB, signed the document on Thursday 17 January 2019 in Brussels at the Villa Empain – Boghossian Foundation where an exhibition of artworks from the EIB art collection (“Beyond Borders” until 24 February 2019) is currently hosted.

The signing of the Berlin Call to Action responds to EIB’s fundamental strategic priority – promoting economic and social cohesion in the EU.  The EIB has invested in cultural heritage over many years, supporting investments in urban development and tourism linked to the European Capital of Culture preparations in Plzen (Czech Republic), Pecs (Hungary) and Malta or financing the refurbishment or development of cultural heritage buildings through several urban regeneration projects in Valletta, Nicosia or recently in Warsaw and Nancy (France).

The Institute has been collaborating since 2013 with Europa Nostra in the framework of the 7 Most endangered programme mixing the cultural expertise and lobbying work of Europa Nostra with the technical appraisal and rescue planning skills of the EIB.