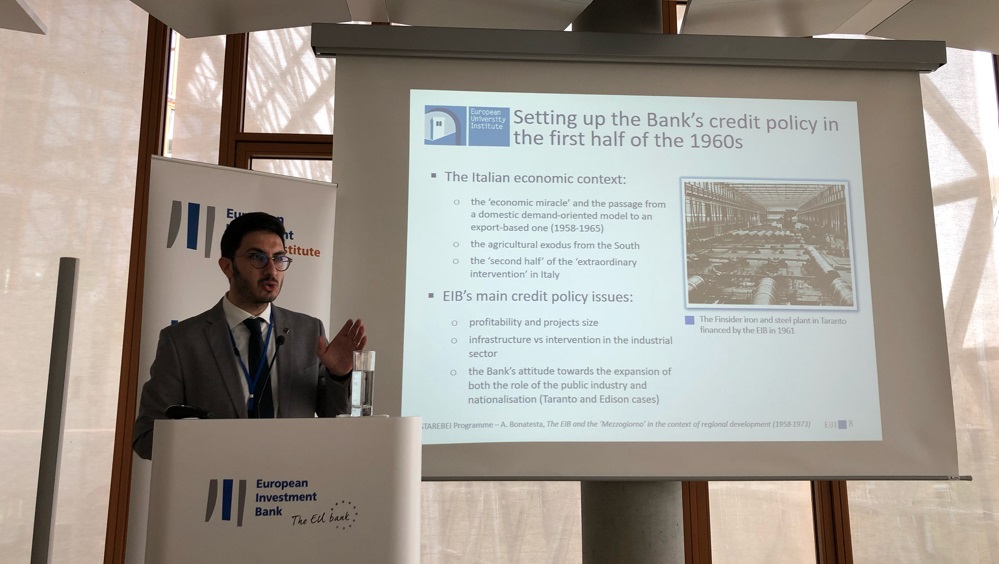 “Since its creation in 1958, the EIB has had a genetic relationship with Italy’s “Mezzogiorno””, said Antonio Bonatesta, European University Institute (EUI-Florence) who presented the results of a STAREBEI research on “The EIB and the “Mezzogiorno” in the context of regional development (1958-1973)”.

Developing Europe’s underdeveloped regions was the first of the EIB priorities according to its statutes and its first President, Pietro Campilli (1958-1959), was a former Minister for the “Mezzogiorno”. This explains why, between 1958 and 1972, more than 60% of the Bank’s loans went to projects in Italy from heavy industry (iron, steel and chemistry (Taranto…)) to dams and irrigation schemes (Metaponto…).

The second President of the Bank, also an Italian, Paride Formentini (1959-1970) structured this effort through “self-liquidating” and “intermediated” loans to investment projects via the Cassa per il Mezzogiorno but also through other intermediaries after 1968 and the creation of the EIB global loan for SMEs. Thus “the EIB played a successful role in the reduction of the North-South gap in Italy between 1958 and 1973” concluded Antonio Bonatesta.

Based on the EIB archives hosted in Florence at the EUI, the research sheds light on the negotiations between the Commission and the EIB as well as between the Bank and its Italian counterparts. It describes the Italian and European economic and political contexts during which these negotiations took place featuring the disengagement of the World Bank from Europe.

The research will be presented again on 11 April 2019 at the EUI in Florence.