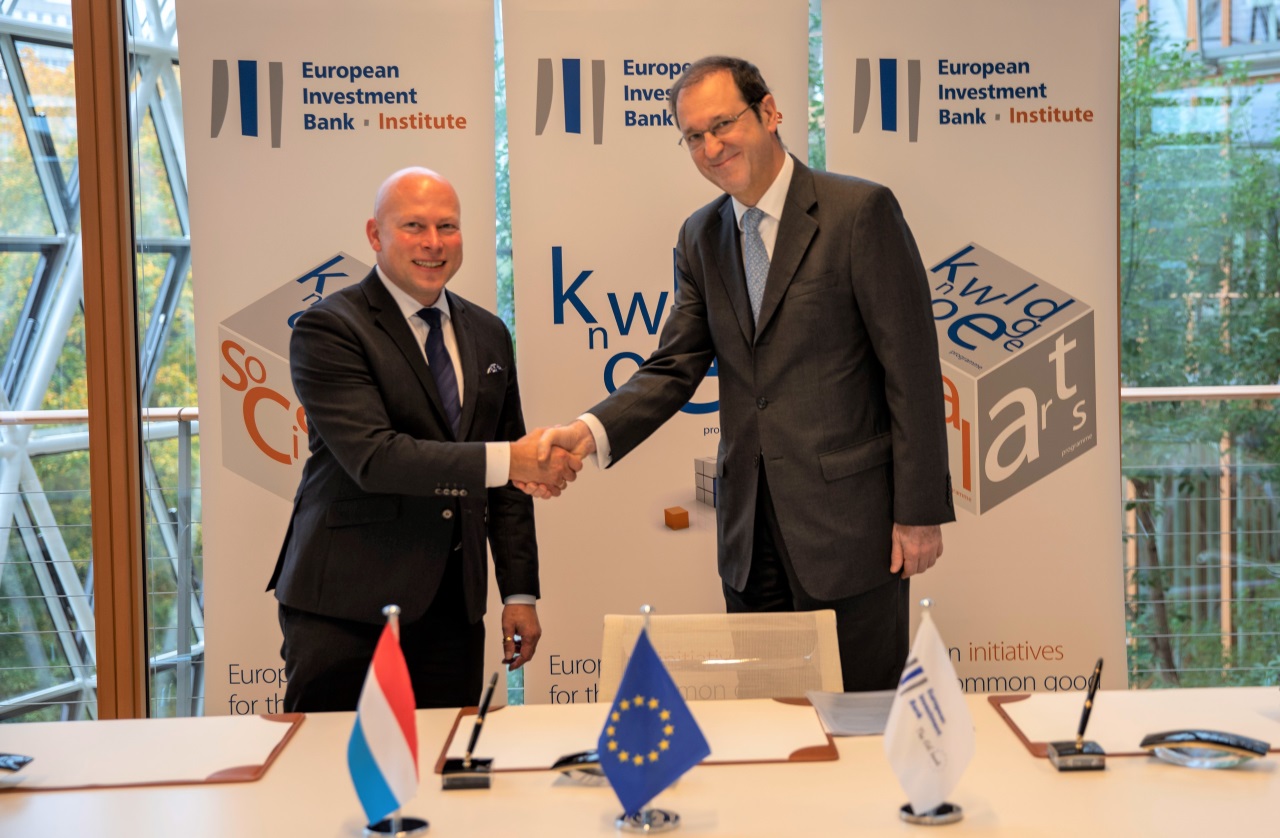 The European Investment Bank (EIB) and the University of Luxembourg have renewed their cooperation agreement covering academic research, teaching and documentation resource sharing. The agreement memorandum was signed by Dean of the EIB Institute Francisco de Paula Coelho and University of Luxembourg Rector Stéphane Pallage at EIB headquarters, opening the October Days for Sustainable Development, a conference organised jointly by the EIB and the University.

This is the second Memorandum signed by the two institutions. It will enable the University of Luxembourg and the EIB to continue and deepen their cooperation in any field covered by their expertise. All of the EIB Group’s activities with universities come under the aegis of the EIB Institute’s.

The aim of the cooperation agreement is to make the most of the inherent potential for synergies between the two institutions in a wide range of domains. It covers areas including research cooperation such as common research projects; teaching cooperation in the form of courses at the EIB and seminars at the University; and cooperation in training and the organisation of work experience placements.

“I am delighted to renew this fruitful partnership with the University of Luxembourg,” said Dean of the EIB Institute Francisco de Paula Coelho. “We are part of the same ecosystem and it is only logical for the university of our host country to be the first we signed an agreement with and the first with which we are renewing said agreement.”

University of Luxembourg Rector Stéphane Pallage added: “The University is proud of its long-standing partnership with the EIB and is happy to continue and expand work on our shared projects. The EIB is a key strategic partner for the University, particularly for its Faculty of Law, Economics and Finance. The cooperation agreement will enable us to develop projects benefiting both the University’s students and researchers and the EIB.”

Examples of cooperation between the EIB and the University include the October Days for Sustainable Development, a joint conference held on 17 and 18 October and that is now in its fifth year, and the Inequality and… conference cycle. They have also developed an inclusive finance-focused training programme – the Certificate in law and regulation of inclusive finance – which will take place for the fourth time in 2020. In July 2019, the University joined forces with the University of Padua to hold the first research conference on the EIB, its role and its impact at Esch-Belval (Luxembourg), including work from researchers from across the world.

Opportunities for internships and Master’s theses, the pooling of knowledge between EIB experts and university professors, the publication of articles co-authored by EIB and University staff, support for the Summer School of the Regional Science Association, and the EIBURS grant are all examples of joint initiatives made possible by the previous cooperation agreement.

This partnership – which is exemplary in more ways than one – between the Luxembourg-based EU bank and the University of Luxembourg dates from 2008, when the EIB decided to mark its 50th anniversary by transferring its documentary collections to the fledging national university. This enabled the University’s European Studies Library to open up access to selected works from the EIB’s historical collections.

The University of Luxembourg is an international, multilingual and interdisciplinary research university with over 6 400 students and 1 700 employees from across the world. Its research domains are materials science, IT and cyber security, EU and international law, finance and financial innovation, education, digital and modern history, health and systems biomedicine, and data modelling and simulation. The University was 17th in the world on the Times Higher Education Young Universities’ Ranking 2019 and 1st in the world for its decidedly international approach.