Artists in residence present their projects 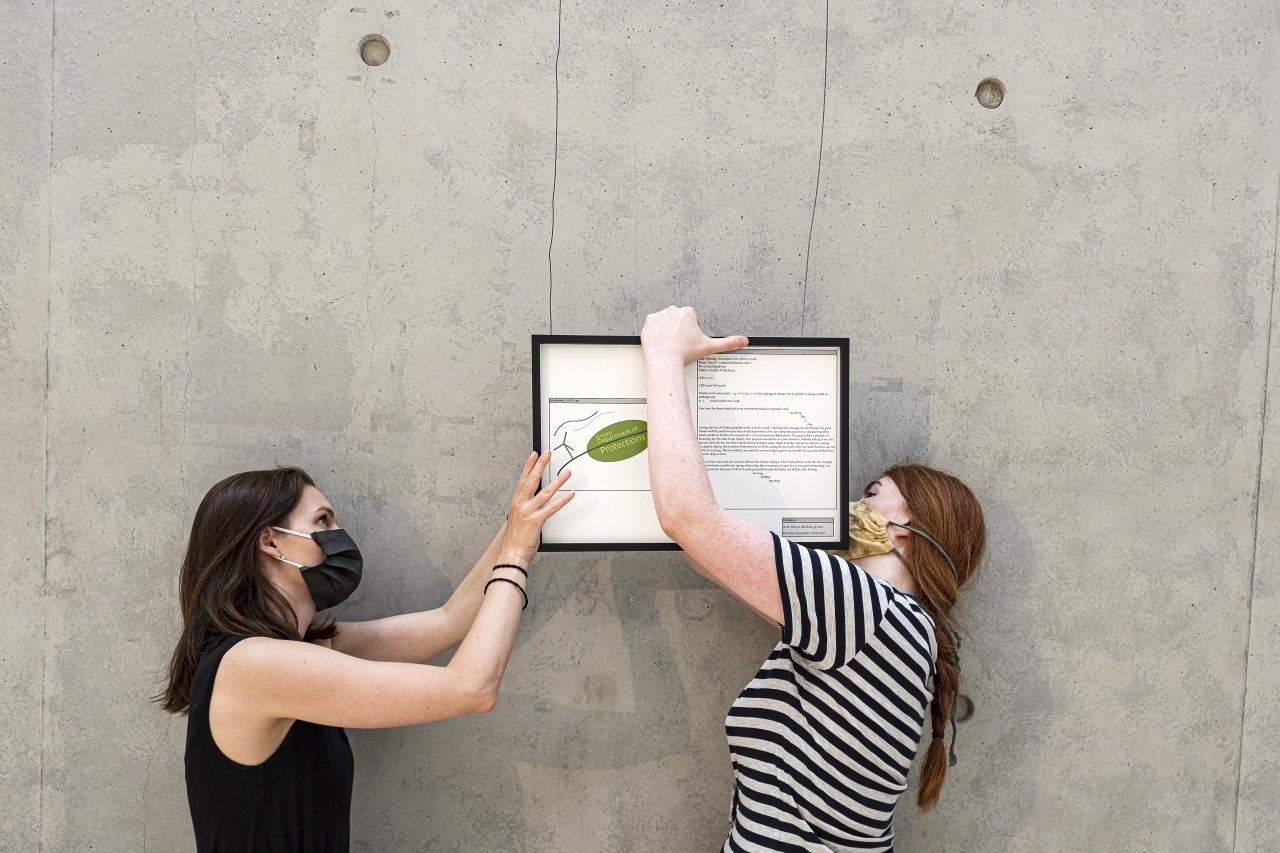 Meta Drčar, Panayiotis Doukanaris and Niamh Schmidtke, winners of the Artists Development Programme 2020, presented their art projects produced under the mentorship of Jorma Puranen to selected museum and art gallery directors at the Abbaye of Neumunster, where they worked and lived during their five week residency in Luxembourg.

Niamh Schmidtke (23, Ireland), who won the thematic residency on “Disruption: The Imprint of Man”, showcased two works of art. The first consists of six framed emails presenting a fictional conversation about a loan for a sustainable development project. The second is a collection of stained ceramic tiles that visualise the projected cost of carbon up to 2050. These are placed alongside a digitally carved stone block that visualises a tri-dimensional graph representing the Multilateral Banks’ climate finance commitments in the last 10 years. In the words of the artist, both works act to “pluralise current conversations about green investment.”

Meta Drčar (34, Slovenia), who won the geographic residency, presented two installations made out of glass and stone, respectively, that engage with the architecture of the EIB’s headquarters. The works have a performative character, as they transform the viewers’ engagement with the space they are in. Drčar believes that architecture can function as “a plastic projection of thoughts and perceptive experience.”

Panayiotis Doukanaris (29, Cyprus), who also won the geographic residency, presented three works of art that open up the question, ‘what is painting?’. His technical process was meticulous and time-consuming, as he de-threaded painted canvases before re-working and re-stitching them to create works of art. The process of destruction and construction served as a poignant and personal metaphor for trauma.

Due to COVID-19, the residency was postponed by one month and the mentoring session planned in Helsinki with Jorma Puranen took place online. The Finnish photographer continued mentoring the artists online throughout their stay in Luxembourg. The fourth winner, Niamh Fahy, was not able to travel to Luxembourg, and will join the 2021 ADP cohort instead.

The ADP is a mentoring/residency initiative organised by the Institute that scouts for, supports and boosts the emergence of promising European visual artists under the age of 35. It offers them a six week residency in Luxembourg to work on the production of an artwork without any material constraints, mentored by an internationally renowned artist. The final exhibition of artworks is one of many professional networking opportunities opened up by the residency which is a unique talent accelerator for European artists.