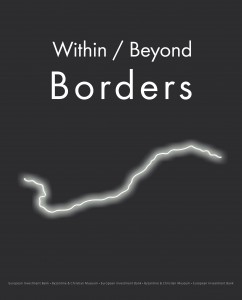 This exhibition of selected works of the EIB art collection was presented in Athens at the Byzantine and Christian Museum in 2011, to mark the 30th anniversary of Greece’s accession to the European Union, and in Lisbon; in the former Church of St Julian in 2014.

The curatorial approach consisted in exploring the theme of frontiers – real or imagined, physical or in the mind. A frontier lends itself to contrasting thoughts about discipline or confinement on the one hand, and innovative exploration or breakthroughs on the other.

The selection of art in this show aimed to explore both angles. It gave examples of the transcending of frontiers or crossing of borders – territorial, intellectual or artistic. It also investigated notions of special and visual limitations and confinement. In doing so, it tested ideas of the already explored versus the as yet largely unexplored. Comprising respectively 40 works and 28 works, the show featured both what are now mainstream historical examples, and what are still considered to be more experimental works.