The EIB Group and Sciences Po, France’s leading university for social sciences, are cooperating in the fields of academic research, vocational training, teaching and other collaboration.

Frédéric Mion, Sciences Po’s Director and Philippe de Fontaine-Vive, Vice-President of the EIB signed a Memorandum of Understanding to that effect on 30 January 2015.

Under this five-year agreement, the EIB and Sciences Po will work together on topics of common interest such as “the social and solidarity economy”, urban issues, climate change, energy, security and innovation and on emerging issues such as big data, smart cities and crowdfunding.

In the field of education, Sciences Po will be able to call more regularly on experts among EIB staff to give lectures as part of undergraduate and postgraduate programmes. Conversely, Sciences Po’s teaching staff and researchers will be able to make contributions on specific themes at the EIB as with Teresa Ribera and Laurence Tubiana in 2017.

The EIB will supervise students’ collective projects in line with its requirements. Two projects were developed in 2015-2016, in 2016-2017 and in 2017-2018. Sciences Po students will have opportunities for internships at the EIB Group in Luxembourg. 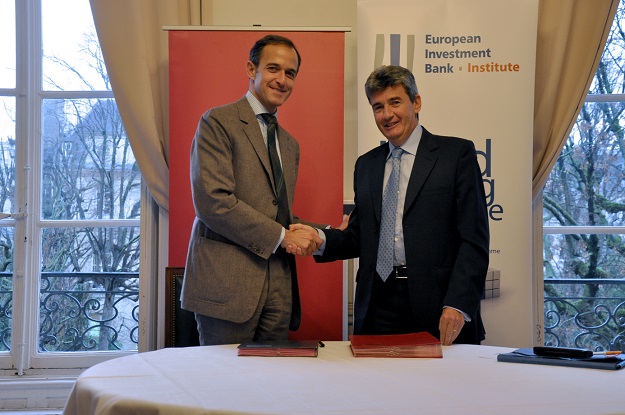